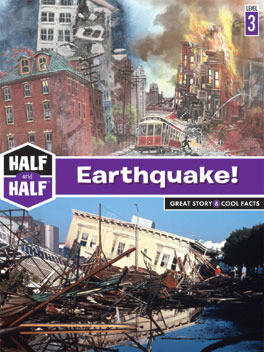 STORY: Shaken to the Ground

Louis and his family arrive in San Francisco on April 17,1906. The next day, one of the most devastating earthquakes in history rocks the city. Many of the buildings crumble and most of the rest are destroyed in the fires that follow. As Louis and his mother are evacuated from the burning city, he resolves to find a way to construct buildings that can survive a great earthquake.

Earthquakes are one of the most powerful and feared forces of nature. We cannot predict or prevent earthquakes, but we can be better prepared for them. Discover why earthquakes happen and why some earthquakes cause little destruction, while others cause such devastation. Plus, learn about some of the most famous earthquakes in history and where they are most likely to strike in the future.