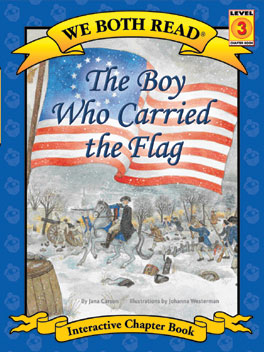 The Boy Who Carried the Flag

Series: We Both Read

During the Revolutionary War, a young boy volunteers for a dangerous mission. Betsy Ross has finished a new flag for General Washington. The flag might help to rally the freezing soldiers camped with Washington in Valley Forge. But British troops are everywhere and anyone trying to deliver the flag may be captured and shot as a spy. Could a boy make the journey without getting caught? Ben sets out in a blinding snow storm in an effort to bring the flag – and new hope – to Valley Forge.

We Both Read Level: 3